The next meeting of the World War II Book Club will be at 7 p.m. on Tuesday, April 21, as usual at the Millburn Library, 200 Glen Avenue Millburn, NJ. 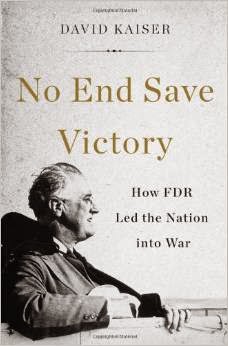 Our speaker will be David Kaiser who will lecture on his new book No End Save Victory - How FDR Led The Nation Into War. While Franklin Delano Roosevelt's first hundred days may be the most celebrated period of his presidency, the months before the attack on Pearl Harbor proved the most critical. Roosevelt skillfully navigated a host of challenges - a reluctant population, an unprepared military, and disagreements within his cabinet - to prepare the country for its inevitable confrontation with the Axis. In No End Save Victory, esteemed historian David Kaiser draws on extensive archival research to reveal the critical preparations that enabled the United States to win the Second World War. David Kaiser has taught history at Harvard, Carnegie Mellon, the Naval War College and Williams College. He is the author of seven books.

Dr. McLaughlin heard this lecture at the FDR Library and immediately booked Mr. Kaiser for the World War II Book Club. He is traveling from Watertown, Massachusetts to deliver this lecture. This is a lecture everyone will enjoy.