The October lecture by James Duffy on his book The War at the End of the World is now online on You Tube.  View the video »

REMINDER: Bonus lecture at the Millburn Library on November 7 at 7 p.m. - Michael Tougias, author of The Finest Hours.
Posted by New Jersey World War II Book Club at 11:51 AM No comments: 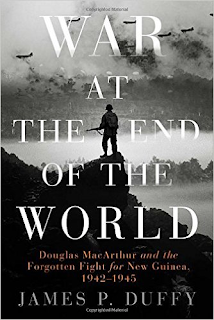 A good group of Book Club members turned out for James Duffy's presentation tonight on MacArthur's New Guinea campaign before returning home to the final debate of this year's Presidential election season.  And what a wonderful presentation it was!  Mr. Duffy spoke about his latest book, War at the End of the World: Douglas MacArthur and the Forgotten Fight For New Guinea, 1942-1945 , a subject most of us know little about.  The Japanese had invaded New Guinea in 1942 and it was General MacArthur's task to get it back and then return to the Philippines.  The geography and climate of New Guinea itself was as challenging an opponent as were the Japanese.  By September, 1944 MacArthur had accomplished his mission, successfully defeating the Japanese and incurring large Japanese losses, while keeping American casualties to a minimum.  Pictures of the terrain, the soldiers ankle-deep in mud, made it clear to the audience as to just how difficult it was to attain this victory.