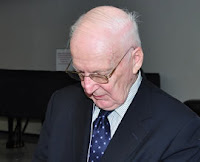 Dr. John J. McLaughlin presented a lecture about the Black Loyalists at the North Jersey Revolutionary War Round Table on February 13, 2013.