Prof. Hedtke to Speak on March 17

The next meeting of the World War II Book Club will be on Tuesday March 17, 2015, as usual at the Millburn Library commencing at 7 p.m. 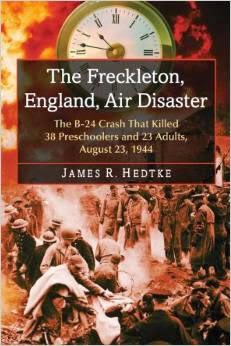 Our speaker will be Professor James R. Hedtke, a professor of history and political science at Cabrini College located in Radnor, Pennsylvania. Professor Hedtke will talk about his recently published book The Freckleton, England, Air Disaster, the B-24 crash that killed 38 preschoolers and 23 adults, August 23, 1944.

On that date an American B-24 Liberator crashed into the small village of Freckleton in northwest England, located approximately 50 miles north of Liverpool. The plane was on a test flight when it encountered a rare and severe thunderstorm. Air traffic control at the American air base Warton recalled the bomber back to the base. When the pilot attempted to abort the landing because of poor visibility and high winds, a downdraft caught the plane and it crashed into the adjacent village of Freckleton. The huge ball of fire that erupted, engulfed a local school, and destroyed close to an entire generation of children in the village of fewer than 1,000 inhabitants as well as 23 adults. The village would never be the same.

Tragedies like this are not uncommon in war and most of them are very much overshadowed, receiving but brief press accounts and quickly overtaken by accounts of events deemed more newsworthy. Professor Hedtke has made several trips to Freckleton, met and interviewed many of the survivors, and done extensive research in preparing and writing his compelling story of this tragedy. His account brings to life the events that caused such havoc and heartache to this tiny English village.

We look forward to a wonderful evening.
Posted by New Jersey World War II Book Club at 9:55 PM No comments:

Unfortunately, the weather has prevented our speaker, Paul Zigo from speaking at our lecture tonight.
Posted by New Jersey World War II Book Club at 10:31 AM No comments: